Months with an "R" 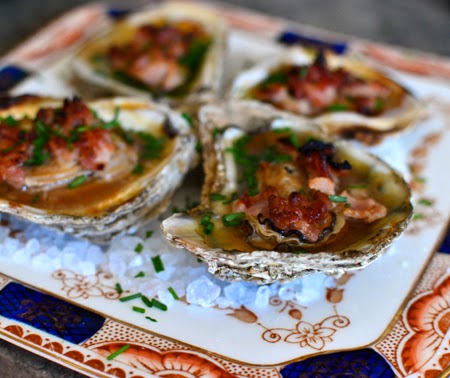 My parents used to say, "No seafood unless the month has an 'R' in it." That meant we could eat shellfish or seafood only from September through April. 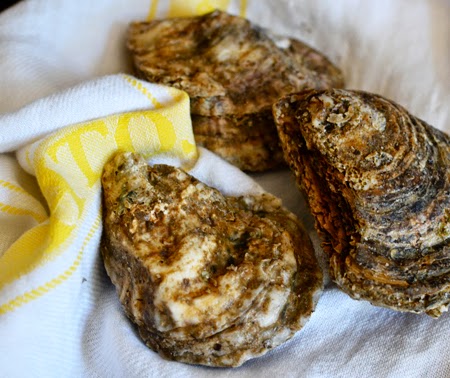 Unless we were at the Cape (Cod, that is), in which case all rules were broken, because it came right our of the sea that day. We knew it was fresh. 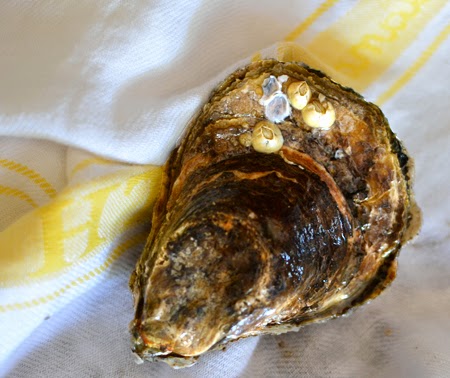 The rule – a widespread folk-tradition – had to do with refrigerated transport, the difficulty of getting seafood safely from docks to cities without spoiling. It was most urgently applied to slurping raw shellfish. If you have ever had a bad clam/oyster/mussel, you would definitely follow this advice. 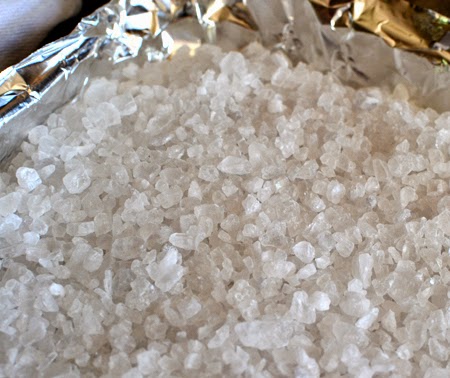 {Apologies to my friends in the Southern Hemisphere, you will need to figure this out on your own. . Anybody Down Under have an adage at works?} 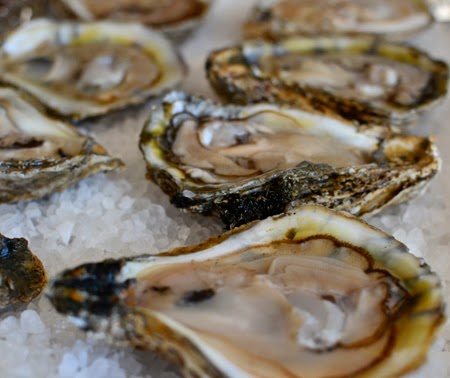 This rule is not related to the seacoast snobbery that I mentioned once before - "Don't eat fish or seafood unless you can see or hear or smell the ocean." That just comes from coastal residents who want to make you feel diminished for living in the hinterlands. 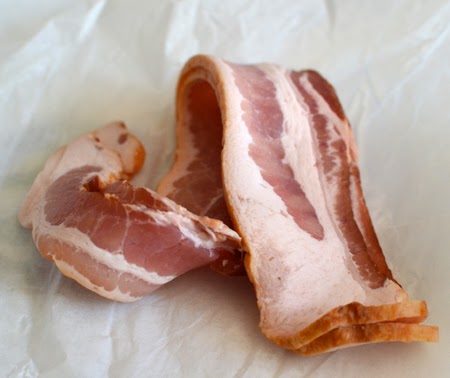 These days, with good refrigerated transportation, it is easy to get great fish and seafood any time of year. Like this morning, for instance, when I wanted to test an old recipe (possibly Australian?) for Oysters Kilpatrick. There are many recipes out there - and some call them Kirkpatrick. As time has passed, the recipes have gotten more and more complicated, adding ketchup, hot sauce and so on. I kept these simple, and used the old name. Don't use a smoky bacon, as it will obscure the delicate taste of the oysters. 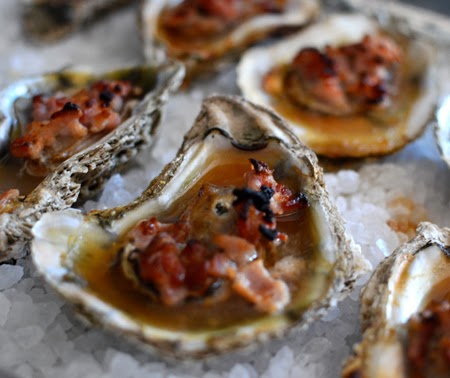 Off I went to the market and asked for the largest, plumpest oysters in their shells. The fishmonger gave me the "restaurant quality" specimens that he keeps in the cooler. He knew I was serious about this. 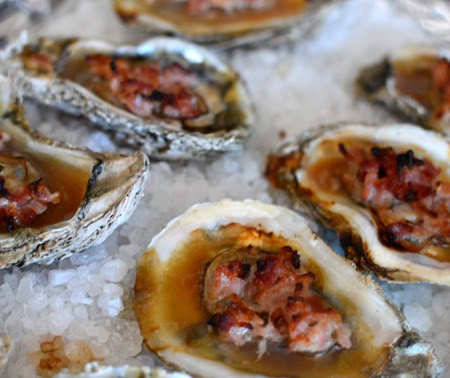 These are beautiful oysters and we are really excited to try this very simple recipe. 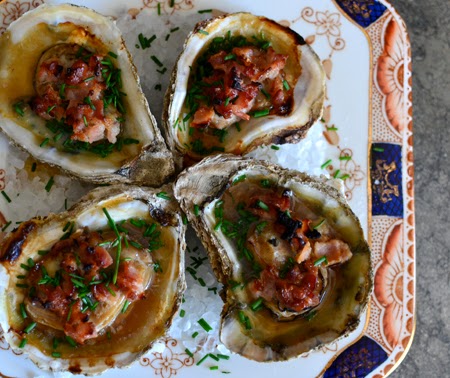 The nice thing about cooking oysters is that they require so little to make them extraordinary; in this instance, a drizzle of Worcestershire sauce, some diced bacon (or pancetta) and a broiler. 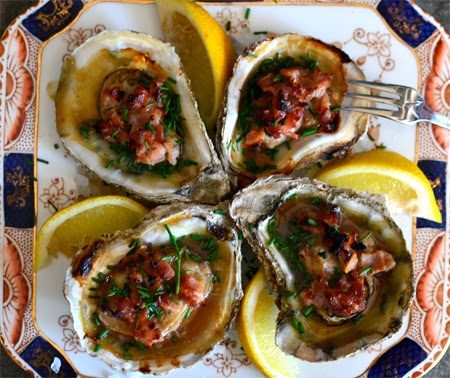 Even though there are eight "R" months in each year, when I was young, we only had oysters on one special day each year - New Year's Eve. 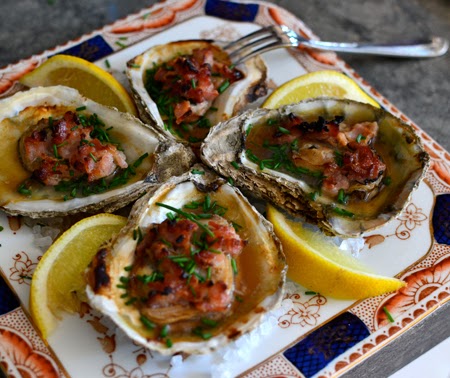 For that special night every year, Mom made oyster bisque for our evening buffet. I will be making it this New Year's here in Tucson, and look forward to sharing that family recipe with you as we get ready for 2015.

But, till then, give this recipe a try! 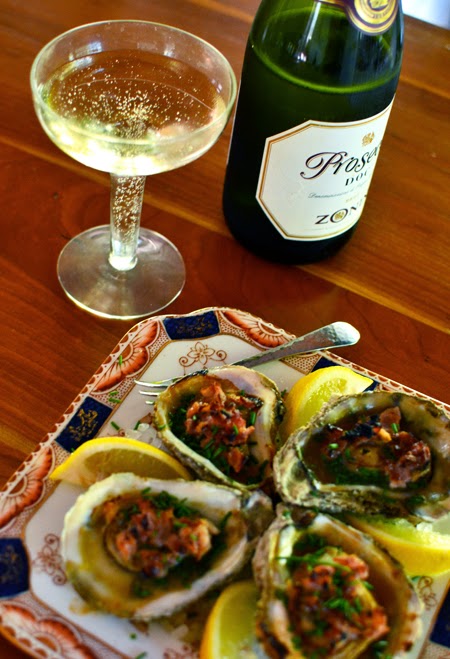 Preheat broiler to high, and set oven rack at the highest level (about 4 inches from the elements). Shuck oysters and place one half of each shell with the loosened oysters on the rock salt, making sure they are level. (They are attached on both sides of the shell, so make sure you detach the side you are using, as well.) You have the option of keeping the oyster liquor, or not. It is a matter of taste and, of course, soupiness.

Drizzle each oyster with 1/4 teaspoon Worcestershire sauce. Sprinkle with the diced pancetta or bacon.

Broil for 10-12 minutes, until oysters are curled and bubbling, and pancetta is crisp.

Serve immediately sprinkled with snipped chives, and lemon wedges. If you like (and as we did), a nice prosecco or champagne is a lovely complement. 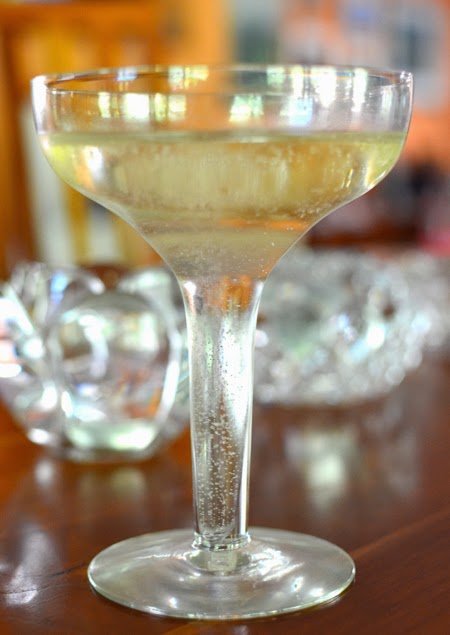