Porking Up for the Holidays 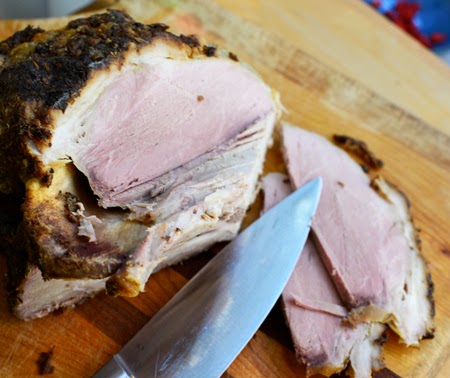 This was a very piggy holiday season. 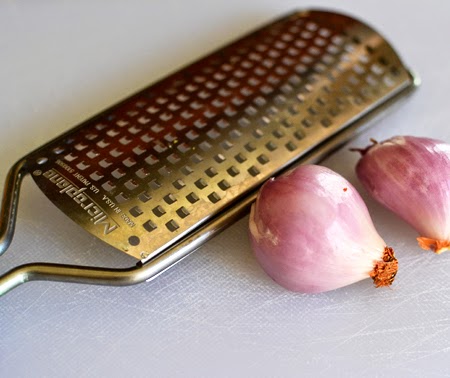 It started when the December Food & Wine arrived with a recipe for Mario Batali's porchetta. Generally, I am not a fan of his recipes, as I find them very Americanized and not really authentic. But this recipe appealed, as long as I changed out the garlic for shallots. 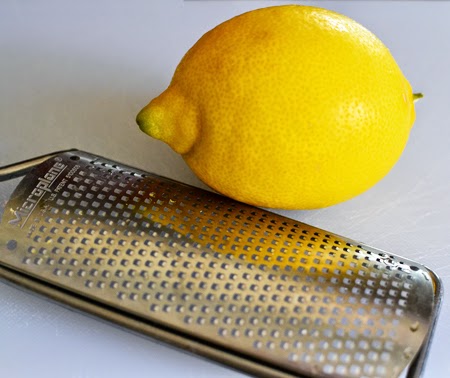 I made it for a dinner party to welcome our young friend Stephanie from Venice; she has come to Tucson to study art history at the University. We were joined by our mutual friends Annamaria and Giuseppe, who divide their time between Tucson and Milan. 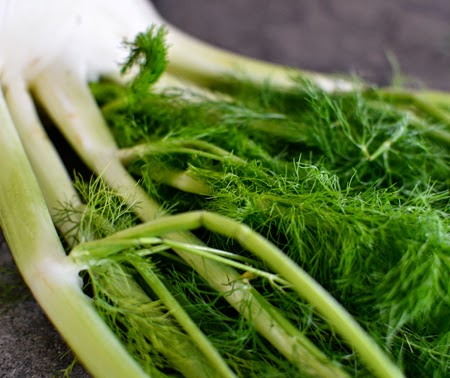 In lieu of the traditional chopped organ meats, Mario's porchetta is stuffed with a combination of sautéed sausage, onions, and fennel, and augmented by fennel seeds, fennel fronds, and rosemary. It is then rolled into a perfectly even shape (hah!), and tied. 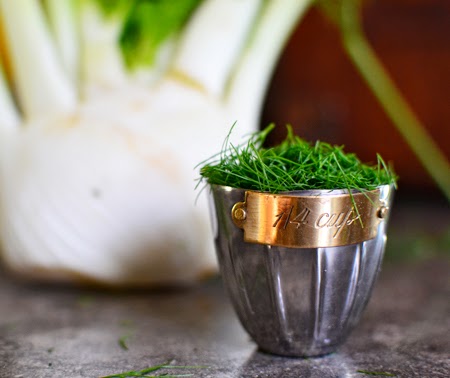 In making the recipe, I found it very difficult to stuff, roll and tie. When it was done and had rested 30 minutes, I also found it hard to slice. The end result was quite tasty, nevertheless, and we all agreed it was worth making again. I made some notes for the next time, which included making less stuffing and making my own pork sausage instead of using store bought (I use higher quality meat - less gristle). 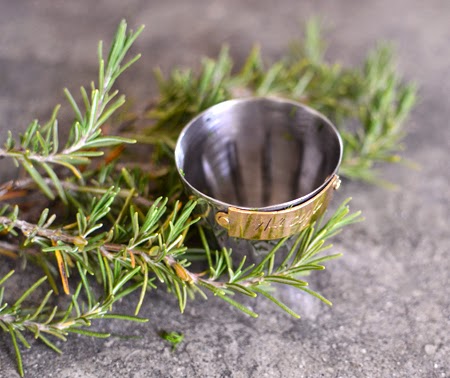 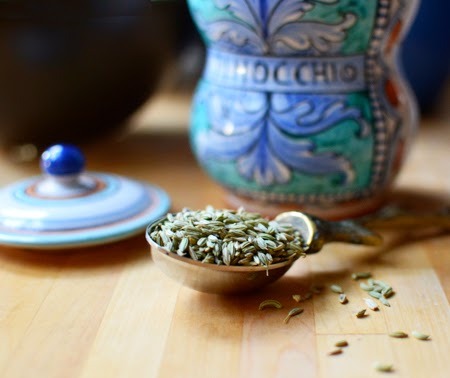 A week or so later, in one of her NY Times videos, she made porchetta and and the editors mention that her recipe is the "real deal." Well, I can assure you that it isn't the real deal but I have to say that it sounded fantastic, and was much simpler than Mario's. 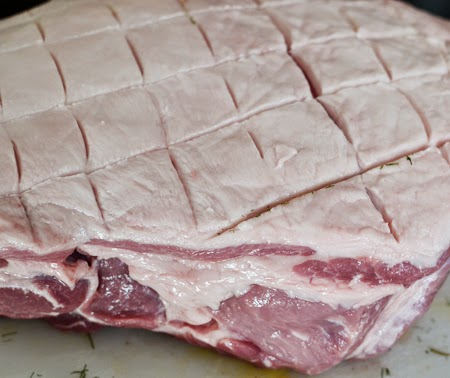 To be the "real deal" in the world of porchetta, one has to bone, stuff, and roll an entire pig, and then roast it slowly on a spit. Let's be honest: this will never happen in my tiny kitchen. 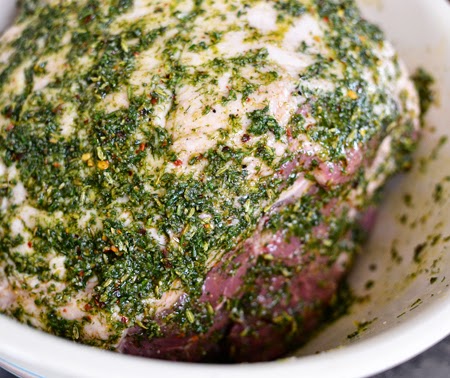 I decided to make Melissa's porchetta for Pauline and Alex, who were visiting from Zurich, Switzerland. It was, indeed, incredibly simple - and the flavor was outstanding! In fact, it tasted much more like traditional porchetta than Mario's. 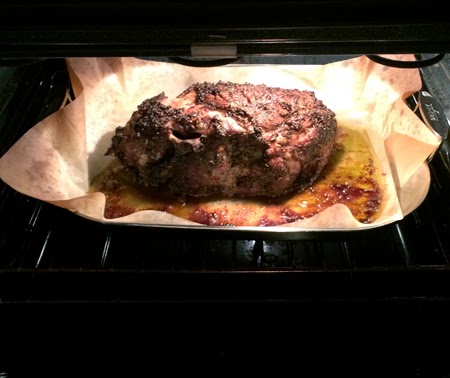 Markipedia found it intensely reminiscent of his first encounter with porchetta at a rural crossroad in the Roman campagna forty years ago: a whole, stuffed pig just pulled from a free-standing, wood-fired, outdoor oven. He is delighted this is a recipe I intend to make over and over. 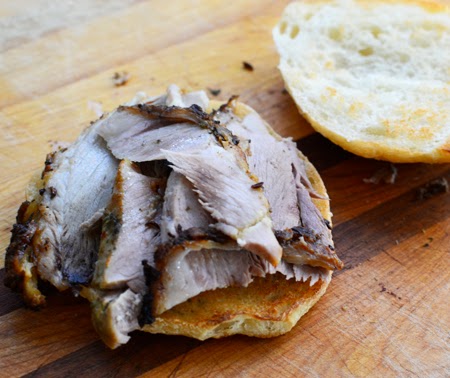 Both recipes say they serve 8 or so... but each would easily take care of a small army. That is the good part about them: they are perfect for holiday entertaining... or, if you want tons of leftovers. (Which is what we are eating this week in the form of traditional porchetta sandwiches on fresh bread crispy from the oven...)

If you are into stuffing, rolling, and tying a roast (really, it is not as easy as his recipe title suggests!), give Mario's a try; the recipe is found here. But if you want a simple, unbelievably flavorful, porchetta-inspired roast, I suggest you give you my slightly-adapted version of Melissa's a try.

I think, after 18 pounds or so of pork between these two recipes, I have had my fill of pork for a while. At least until next week. 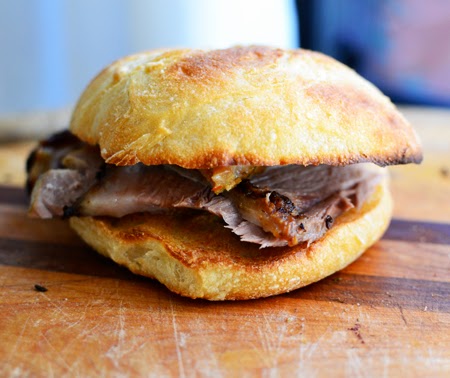 Score skin and fat all over pork at 1 1/2-inch intervals, taking care not to cut down through the meat.

In a food processor, combine fennel fronds, rosemary, sage, shallot, lemon zest, salt, fennel seed, red pepper flakes, black pepper, and olive oil. Pulse until it forms a paste. Rub all over the bottom, sides and fatty top of the pork, making sure the mixture gets into the scored sections of the top. Transfer to a large bowl and cover with plastic wrap. Refrigerate overnight.

Remove pork from refrigerator 1 to 2 hours before you want to cook it. Heat oven to 450°F. Transfer pork, fat side up, to a parchment- or foil-lined, rimmed baking sheet and roast 35 minutes. Reduce temperature to 325°F and cook an additional 3 to 4 hours, until a thermometer inserted into the thickest part of the meat reads 180 degrees, which will give you sliceable, tender meat. (Mine was done after about 3 1/2 hours.)

Transfer pork to a cutting board and let rest 30 minutes before serving. When slicing, make sure everyone gets some of the cracklings.

Leftovers make the best sandwiches, much like those available in food trucks at the daily markets in Italy. Simply warm a few slices of porchetta, and put them on freshly baked warm ciabatta - no mayo or mustard needed. They are simple and wonderful on their own.

Note: There are regional differences between Tuscan and Roman porchetta, as told to me by my Markipedia. The Roman version is heavier on its use of fennel, while the Tuscan version leans more to the rosemary side of the spectrum, though in neither case to the exclusion of the other herb.